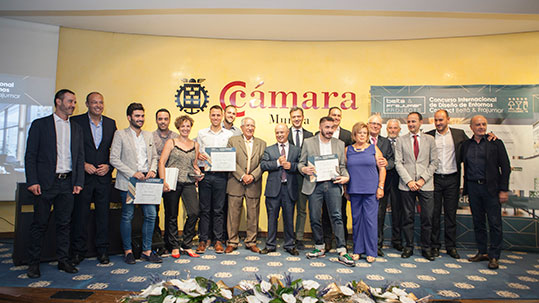 Posted at 18:24h in Contest, News by BeltaFrajumar 0 Comments

On the evening of 20th September the InterCIDEC. Award Ceremony took place at the Murcia Chamber of Commerce. The Ceremony opened with a speech by the CEO of the company, Mr. Francisco Juan. An emotional greeting followed by the video “InterCIDEC making off of a dream”. And the winners are:

.Winner of Professional category, for breaking established rules, investigation of the emerging social behaviour and transforming the conventional space and business of Hotels, Maza Lab Estudio for its project Itinerant Hotel. The prize was given by Mr. Andrés Carrillo González, Government Counselor of Taxes and Public Administration.

.Winner of the Students Category, by achieving that the distribution of a limited space can give the personality to a Project. Integrating the space and services and because of its personality and risky theme. Prize for Alejandro Sánchez for the Project Capsule Restaurant. Award given by Mr. Marcos Ortuño Soto, Mayor of Yecla. 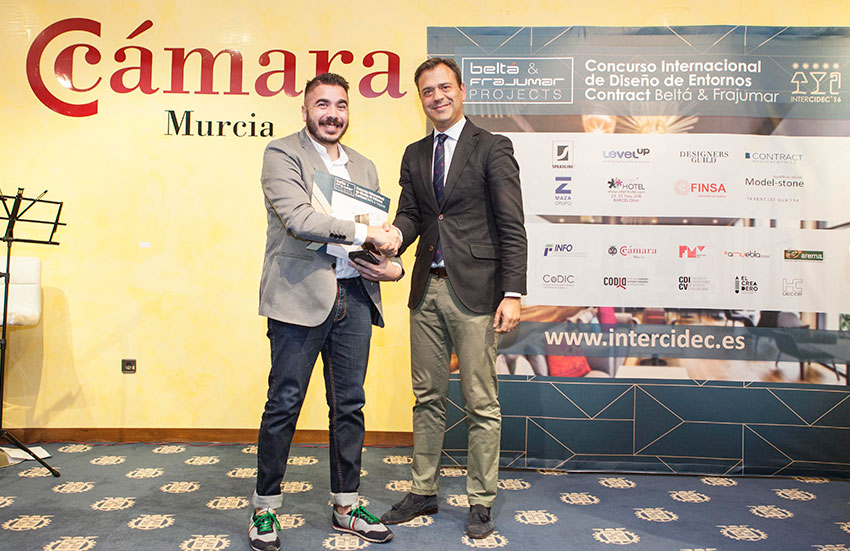 .First accesit by creating an space inspired in the philosophy of the Mediterranean cuisine bringing all to a Contemporary level. Merging nature and architecture in a clean and rational environment. A place to enjoy the cuisine and achieving a unique experience, is for Gonzalo Terol for the project Author’s Restaurant. Award given by Mr. Javier Celdrán,  Director of Instituto de Fomento de Murcia. 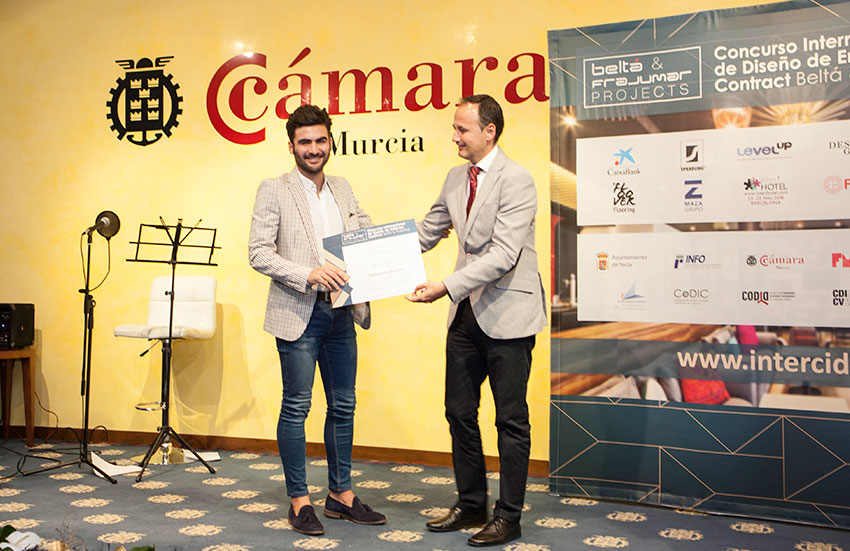 .Second accesit by generating a proposal integratedand respecting its environment and using local materials in order to minimize the project impact and creating a natural Sanctuary, the prize is for Cristina Olivar and Katerine Salazar for the project Reverdecer. They are from Chile and could not come so they were represented by Jorge Juan. Award given by Mr. Pedro Garcia Balibrea, President of Murcia´s Chamber of Commerce. 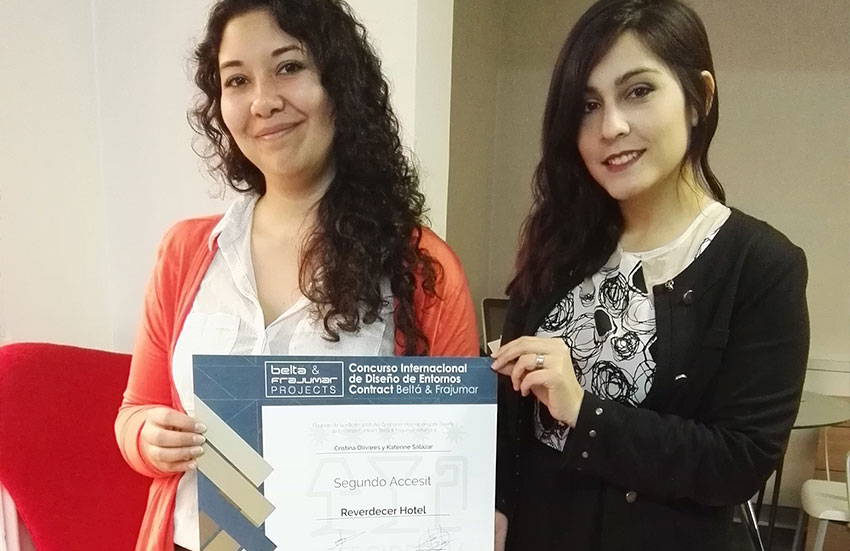 .Third accesit for creating and stimulating and functional space. A multipurpose area with special acoustic comfort and interesting for the sensations received by the client. Prize for Dsignio for the project Le Grand Hotel. Dsignio was represented by Carlos Juan. Award given by the Dean of the Colegio de Diseñadores de Interior y Decoradores de Murcia. Mrs. Rosa Sánchez. 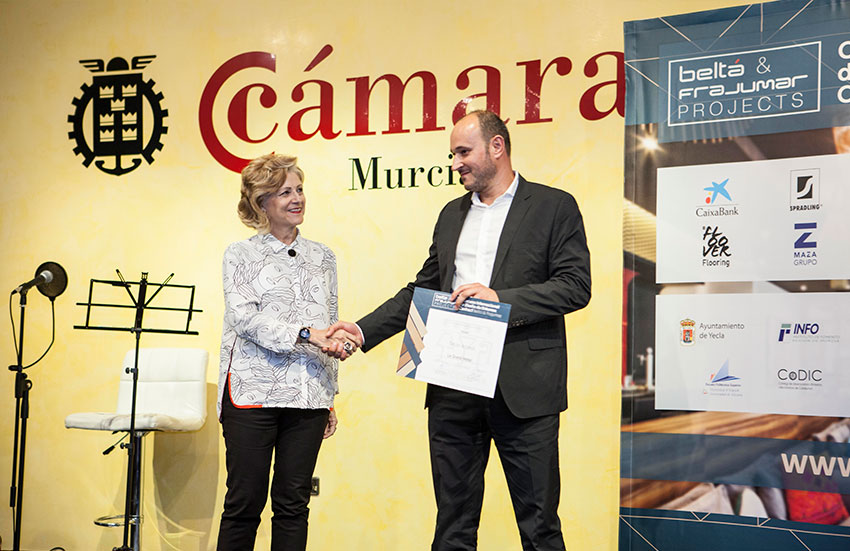 In the Ceremony also took place an special recognition. Mr. Francisco Juan, founder of the Company Beltá & Frajumar gave this recognition to Mr. Diego Granese. Diego is a known architect, interior designer and product designer, with large experience.   He had a very important influence in the history of the Company Beltá & Frajumar. He created such important pieces as the ONDA Divan, achieving the first prize at Feria Habitat Valencia. Products with large personality that helped him and the Company to be positioned in the domestic and international markets with an avantgarde design. 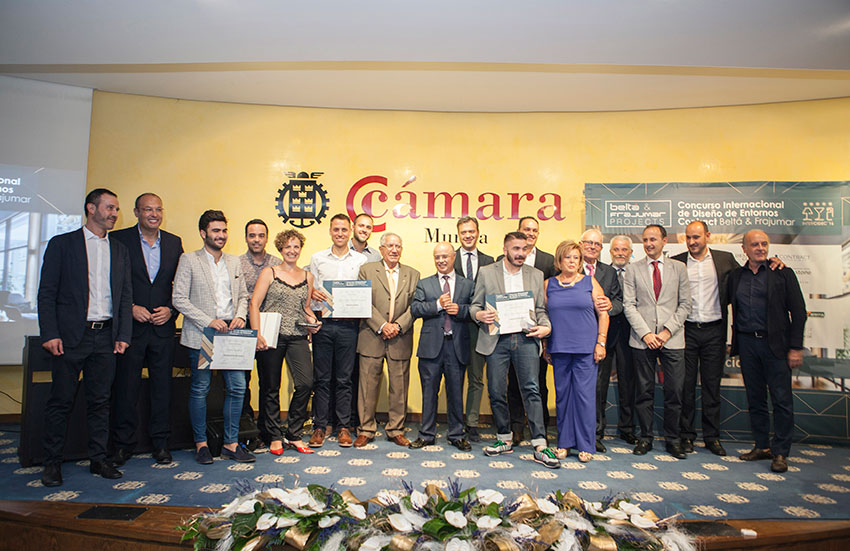 After the ceremony the public could see the exhibition of projects presented in this edition as well as having a cocktail with local products from Yecla.